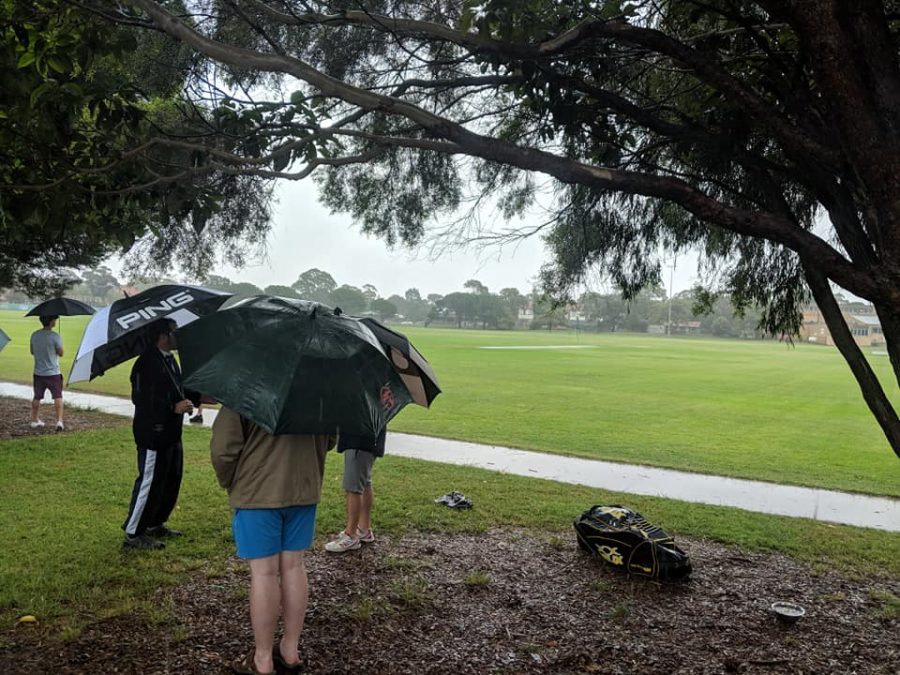 The First XI Apaches’ summer campaign has drawn to a close after heavy rain brought an early end to the semi-final contest.

After winning the toss and electing to bowl, Pat Foley and Bryan Seymour immediately set about putting pressure on the Clovelly top order. Albeit on a slow field, Clovelly only managed 18 runs for the loss of their skipper – LBW to Seymour – before the drinks break.

Al Yap was introduced after the drinks break and immediately produced chances, which were mostly taken. Sujee took a wicket with the first ball of his spell, and the Apaches went to tea in a strong position with Clovelly on the ropes at 6 for 79.

Taking to the field after tea, a brief shower blew over the ground, interrupting play for about 20 minutes. Although the ground dried quickly, inevitable moisture on the ball was an advantage for the Clovelly batsmen.

Nevertheless, the Apaches remained focused and alert in the field; and in doing so looked much more like the finals team than they have in recent weeks. Sustained pressure lead to wickets falling consistently, and Clovelly CC was bowled out for 120. Both Al and Seymour ended up with four wickets.

Confronted with the requirement of 121 for a first innings lead and likely grand final berth, the Apaches had 50 minutes remaining on Day 1 to reduce the deficit. Enter Will Sammuri.

Will was not available for Sunday’s play and from the get-go he slammed the Clovelly attack, putting one opener out of the attack with 11 runs taken from one over. One pull-shot for six came right out of the screws and nearly landed on the pitch at the toilet block.

Eventually, Will managed to avoid middling the ball and was caught for 36 under darkening skies. But by then major damage had been done to Clovelly’s lead. Sujee joined Will’s opening partner VB (9*), but another shower ended the day’s play early. The Apaches ended the day at 1 for 46 and strongly placed for Day 2…

… which never happened. Constant, and at times heavy, rain poured throughout Sunday morning and into mid-afternoon. Shortly after the scheduled start of play, it was clear there would be no possibility of a result, and so ended the Apaches’ summer season.

The last round of the regular season had seen poor weather help the Apaches secure the last finals spot; and so it was hard to complain when luck ran against us.

All the same, some bright spots emerged from the second half of the season:

The Apaches’ awards night will be held in April with more details to follow shortly.